Getting started with GitLab

From mi-linux
Jump to navigationJump to search

You can sign in using your usual university credentials. Make sure that you select the "LDAP" tab on the "Sign in" screen: 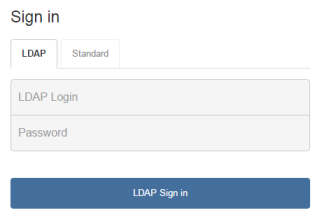 Your next step is to create a "Project" that will contain your work. Click on the "+ New Project" button.

And populate the following fields:

Important: The Visibility Level should be set to "Private" for all assessment-related work. Any other Visibility Level would allow other students to look at and clone your work, which equates to Collusion under the University's Academic Misconduct regulations.

When visiting your project's homepage you are presented with some Git commands that you should run to create your first repository. Please note that you get 2 access options:

We'll look that HTTPS for now, so click on the "HTTPS" button near the top.

Your project's homepage should contain commands similars to these ones.

Please use your own details, these are mine, and only included here as an example!

You have 3 options in order to run the code above in the MI labs:

Let's look at each command in more details:

The commands above simply set some global settings (your user name and email address) that are required for this process.

If you omit these you will get the following warning later on:

Well, nothing too difficult here, we simply create an empty folder and move into it. Note that you may wish to move into an existing folder that already contains files instead, like this:

Once you are in the correct place (i.e. where your files are), you type this:

This command simply creates an empty test file called "fashion.md". This is optional, you don't need to do this if you already have files in there (e.g. PHP files)

Second important command. git add adds a file to the repository's index. We can run this command to add our dummy "README.md" file, or any existing files you may have (see the second command, adding all PHP files in the folder)

Note: If you wish to add files recursively (all files in current folder and all sub-folders), the command is:

Then on to commit:

Third important command! git commit records all changes to the local repository. This should be run regularly when your code is in a working, stable state.

Important: for now your changes were only committing to the local repository. To commit them to the central repository you'll need the "push" command below.

Note: It is always considered good practice to include notes and comments when committing code to a repository, so that other developers can read about your update. When using the command line this is done using the -m argument, as demonstrated above.

This is an optional command that create a "remote", aka an alias (or shortcut) to your lengthy repository's full address. In this case we name it "origin". So from now on we can simply refer to "origin" when working with this repository (see below!)

Note: your repository's address should contain "https://". If it doesn't then your forgot to press the "HTTPS" button earlier.

And here is the final important command! git push commits all local changes to the central repository, i.e. "origin", defined in the previous step.

The second parameter is the "branch" you want to commit to. In this case we create a default branch called "master". We'll worry about branches later.

Important: for now you will need to retype your login and password every time you want to push changes to the central repository. We'll get around this later using the SSH method instead of HTTPS.

If you go back to GitLab (in your browser) and refresh your project's homepage you should now see something similar to this:

We can see 1 commit to our new branch "master". If you click on the "Files" tab at the top you will see the files you pushed earlier. In my case I pushed a file called "home1.html":

Whether you use an old fashion command line Git Client or a fancy IDE, it is crucial to understand the process and the various steps required when working with git: 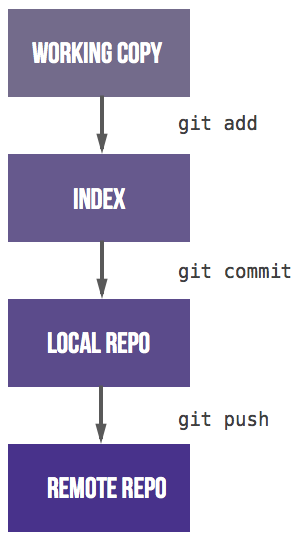 Cloning and pulling from GitLab